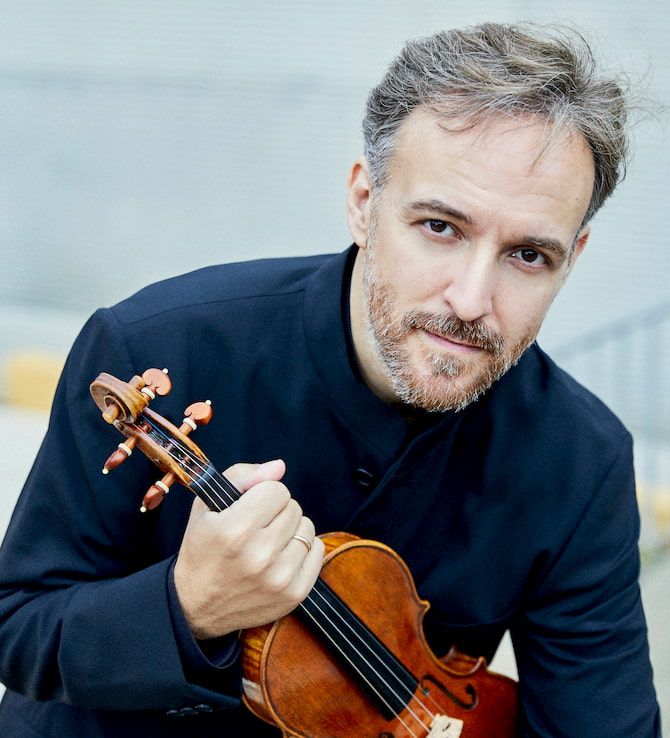 Enrique Rivas completed his advanced studies at the Padre Antonio Soler Conservatory in San Lorenzo de El Escorial, Spain. He studied violin with F. J. Comesaña, and chamber music with Graham Jackson. After completing his studies, Rivas received scholarships from both La Caixa and the German Academic Exchange Service (DAAD) to relocate to Germany and undertake postgraduate studies with Andreas Krecher at the Advanced Music School in Düsseldorf.

While in Dusseldorf, Rivas completed postgraduate studies with a specialisation in String Quartet under the tutelage of the Melos Quartet. He later continued his chamber music studies at the Escuela Superior de Música Reina Sofía under Rainer Schmidt. Rivas received chamber music training with the Enesco, Auryn and Vogler Quartets, and he has attended master classes with Zoria Chickmourzaieva, Nelly Skolnikova, Leon Spierer, Evgueni Bushkov, Joaquín Torre, and Marco Rizzi among many others.

Enrique Rivas was part of the National Spanish Youth Orchestra from 1994 to 1997. He has performed with many orchestras across Europe, including the Spanish National TV Orchestra (RTVE), the Comunidad de Madrid Orchestra, the Reina Sofía Orchestra, as well as the Neues Rheinisches Kammerorchester, Deutsche Kammerakademie Neuss and Detmolder Kammerorchester in Germany. He has also taught at the Juan Crisóstomo de Arriaga Youth Orchestra in Majadahonda, Spain.

In additional to his orchestra work, Rivas has given concerts in well-known concert halls across Spain, France, Germany, China, Switzerland, Costa Rica and Palestine, alongside musicians such as José Luís Estellés, Imre Rohmann, Peter Buck, María Kliegel and Daniel del Pino. He has been invited to teach violin and chamber music classes in the Oviedo Advanced Music Conservatory, in Tenerife, Islas Baleares, the Musikakademie Sighisoara in Romania, the Edward Said National Music Conservatory in Palestine, and the Musical School of Integrated Arts (EMAI) in Costa Rica.

Rivas has recorded the Mendelssohn and Shostakovich octets for the German label Animato, and he has recorded the complete Ramón Barce quartets for Verso. Rivas has also recorded a CD with music by Antón García Abril and pieces by Alejandro Román and Ramón Paus for the Spanish Radio and Television Corporation (RTVE).

In his academic research, Rivas has earned a Master’s degree at the Universidad Rey Juan Carlos I, where he completed his work “Contributions of the String Quartet to XIX century Chamber Music” for which Granada University invited him to participate in a concert-conference at the International Congress: “Looking for identities: Chamber Music in the Mediterranean Countries during the late-19th and early-20th centuries”.

Enrique Rivas is a current member of the Duo Hypatia, together with pianist Elena de Santos. He also teaches violin at the Conservatorio Profesional de Música “Teresa Berganza” in Madrid.

Aside from his musical career, Rivas holds a Bachelor’s Degree in psychology from the Universidad Autonoma de Madrid.

Enrique plays on a Bertrand Bellin violin made to him in 2019.

This website uses cookies to improve your experience while you navigate through the website. Out of these, the cookies that are categorized as necessary are stored on your browser as they are essential for the working of basic functionalities of the website. We also use third-party cookies that help us analyze and understand how you use this website. These cookies will be stored in your browser only with your consent. You also have the option to opt-out of these cookies. But opting out of some of these cookies may affect your browsing experience.
SAVE & ACCEPT